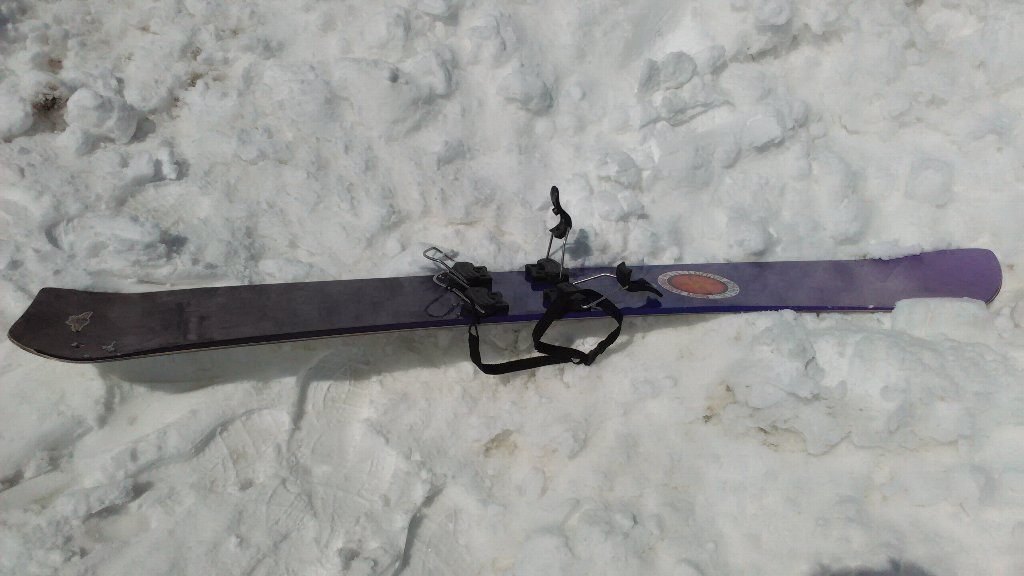 It is very simple like this also used for mini-ski .

Feel like a little unreliable, but as both legs are fixed to one board about Monoski, strong stress never load to one leg.
Therefore you don’t need to tighten bindings so much.
Furthermore you don’t need tight boots and tighten them, therefore it’s more comfortable than 2-legged ski : normal ski.

To refer to 2-legged ski, whole weight sometimes load on one leg (or one board), and boards are tossed about by the snow to right and left, then strong stress load on bindings, as a result, it cause bindings to release.
“Ojisan” have experianced that binding have come off the board which I bought at a bargain in a sport shop when I was skiing on moguls.
Not released, but broke.  Bolts came off the board!

“Ojisan” have used this Monoski over 20 years, it’s still in good condition.

There are many ski shop in Kanda, Tokyo, Japan.
I walked around and entered one after another, but I never found Monoski.
To think now, I had better go to shops after telephoned. (^^)
I thought I could take Monoski just by going.

There was not ADSL, but dial up.
I looked for Monoski and bought through agent in Japan.
Certainly it cost about 70,000 yen with bindings, shipping fee and so on.
There isn’t Amazon. com like today.
I didn’t know how it was and whether or not it would be actually delivered, that was a bet.
As a result, I’ve got a very good one.

Recently I searched Monoski, then I looked the one perfectly same as mine put on the market called “Rare!”.
Is it about fossil? (^_^;)

Umm…I had better buy a new one?

Be sure to put “leash cord” on.

Though I never experienced that both of bindings release at the same time.
Sometimes it occurs that one binding releases because snow stuck on the bottom of boot. (^_^;)

Usual boots for usual ski.
You don’t need to put boots for rigid alpine skiing on as written above.
It’s OK that is soft and hold totally your feet!

It feels like this you attach a boot to the board.

It’s “telescopic” pole that “Ojisan” have begun to use for Monoski.
That will extend and contract.

At first, I used the ones for 2-legged ski, but I felt it was little difficult to Monoski.
I’ve got to know that I lower loins even more squat in extreme case, then I thought change shorter ones.
But it’s the problem if poles would be too short after I bought them!

Then I’ve got to know “telescopic” poles which is variable length.

“Telescope” is a device to see far like stars.
The mechanism is that double cylinders slide and change length.

As you turn it counter-clockwise, it loosen, then you adjust the length you like, thereafter you turn it clockwise to fix.

“STOP” and “×” of photo above says that “If you would extend me over this line, I might come off!”
This pole can extend up to a maximum of 123cm.
I experimented various length, I Monoski with shortest 100cm in conclusion now.

With Monoski I bend and stretch throughout skiing harder than 2-legged ski.
That is repetition of compression and jump.
As I sweat, the goggle get fogged soon.
Anti-fog agents never take effect.
If you can’t see outside, how you can ski, can you?
As a last resort, I remove goggle, then I can’t see surroundings after all especially when it snows .

Therefore I decided to buy a “Goggle with Fan”.  That is a ventilator.

This is a fan.  Just same as extractor fan of kitchen.

EVER : it runs ever.
AUTO : it runs only when humidity in the goggle rises up with sensor of humidity.

I’m really troubled by dedicated battery for smartphone or button cells which are hard to obtain and expensive.
I wonder what on earth built-in battery of smartphone is made?
We must buy another whole body when battery has passed away.
What?  There is no one who use to that extent?

Anyway you have no worries for battery out if you carry one reserve.
I never experienced battery out.

Be sure to put it on, don’t say bothersome or uncool!
It’s really dangerous if you would fall down.

This driver has many kinds of bits inside.
Long driver is dangerous!  Don’t carry the long one.
It might stick you falling down.